2016 IOTA (as 2U0DWD) was my first ever contest – living on an Island I sort of feel obliged to participate and only having been licensed for 3 months it was an eye opener – 12 hours was chosen although I do not believe there is any separation in the newcomers section for 12 / 24 hours – over the 12 hours I chose (it was less than that in the end) I made just 87 QSO’s and obtained 5th place in the newcomers section – I was happy with that considering I only had a 20m dipole and only worked 20m too.

2017 IOTA (now as MU0WLV) was my third contest (I had done an ARRL one a short while before this years IOTA) – understanding the way things worked a little more and the timings a bit better I managed 121 QSO’s this time adding a 10m vertical to the 20m dipole – again for the 12 hours option. This year I came 4th – very pleased with that.. more QSO’s and one place better, happy days! 🙂

2018 IOTA this time I understood a lot more of how it all worked… so it was / had to be better than last year… However disaster struck – the weekend before we had a tree bough break off which in turn brought down my 20m & 40m dipoles and snapped one end support and also the para cord at the other end on the 20m dipole…. 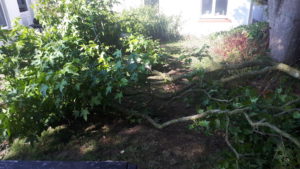 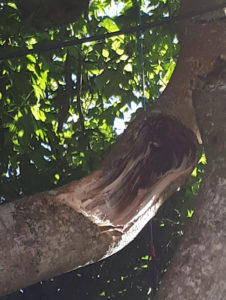 With work commitments getting in the way and always being so tired when I get home I decided to take the Friday afternoon off – I had a plan for the end support and cut it up at work, it worked really well – hoping to please my wife that it wasn’t a dodgy stick like last time I decided to paint it white and after a few weeks of really hot sunny weather guess what happened when I got that paint brush out – you guessed it, it bloody rained… hey ho, it wasn’t supposed to be a high grade paint job, just to make it look nicer.. 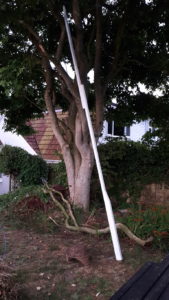 As the painting took place the Friday afternoon  I left it dry and went to the pub – its Friday eh, it would be rude not to – Saturday morning came and I had a hangover – ooh my head hurt so that’s not a great start to the day… I had yet to put the pole in to the vent pipe and string the dipoles back up, I hadn’t even tested them to see if the tree break had messed with any of the connections or my choke on the 20m dipole. And now its Saturday – the day of the contest… 12:00 UTC start… I had this hangover, the ladder climbing to do and stringing and testing… oh lets hope it all comes together… and blow me, it did… everything went up easily enough, the dipoles checked out OK, I am ready, bring on IOTA 2018… 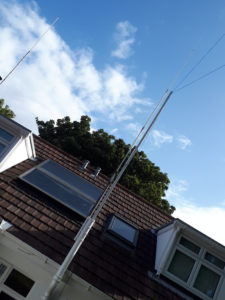 I decided on 12 hours again just because I’d be ‘futu’ (that’s Guernsey slang for quite tired) – This year, after another year of learning I realised that now with the 40m & 20m dipoles, and the 10m vertical I could have access to a few more bands – not that its easy getting away from the resonant areas for the antennas but once I had exhausted operators I could at least have a look around…

I started at 12:00 UTC, the bands were pretty dead before that but suddenly at 12:00 they spring to life 😉 I managed until 17:20 UTC and then had to go to work for a couple of hours, useful as it meant I could spread my time a little better – During that first 5 hours I called CQ a few times but didn’t get a sausage strangely – obviously no one wanted my IOTA ref EU114 it seemed so I stuck to ‘search and pounce’.

40m before the contest: 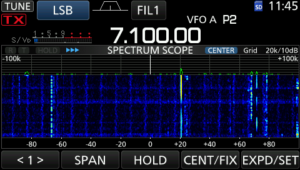 40m during the contest:

40m after the contest: 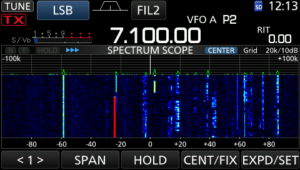 When I came back from work at 19:20 UTC I started where I had finished, search and pounce, and the bands were still quite lively – come about 21:00 UTC I was tired… so went and watched some TV with the wife and crashed…

Back in to the shack on Sunday at 06:15 UTC and I’m back on it – this meant I would finish an hour before everyone else at 11:15 UTC but that suited me and come that 11:15 my log was telling me I had 179 QSO’s – oh happy days – much better than last time…. very pleased regardless of what position I come but third would be nice if possible please 😉

I actually worked 176 stations due to cat QRM (#catintheshack she kept walking on the keyboard and wouldn’t leave me alone), of which 111 were IOTA stations and 38 of those were different islands. Mostly European, a few African and one North American so I didn’t find much DX unfortunately.

Now comes to the bit I hate – sorting the log out and uploading… as I’m now running Linux there doesn’t seem to be a clean and easy contest logger for it, everything is Windows orientated… I had tried a few during the previous week run up to IOTA and found nothing.. well nothing that worked how I wanted it to – so I used CQRlog – I set up an new log and used its contest setting – it was basic enough BUT CQRlog doesn’t export to cabrillo – here we go, another problem… anyway to cut a very long winded story short…. 6 hours of messing about later and doing lots of things manually (thankfully for only 176 QSO’s) I managed to get my log sorted and uploaded – it was a huge amount of faff and I’m surprised that CQRlog doesn’t have the ability to export to the cabrillo format – that being said I have no idea what’s involved, I guess if it was easy its likely to have been done 🙂

I MUST say thanks to @ei8kd for sending me a link to ON4QZ’s Adif to Cabrillo converter which helped me no end to get the conversion ready for upload & thanks to ON4QZ too obviously 😉 – however whilst it didn’t do everything (or I couldn’t work out how to get it to do everything)  it did do most of it and get it in to the format required! Thanks Gents!

That’s now a grand total of 5 contests under my belt (including the RSGB VHF NFD earlier eh!) – I still don’t really find them ‘exciting’ but its a learning experience and you are guaranteed a QSO 😉