This post is directed at my local Guernsey friends…

You may or may not be aware but after I’d had enough of the local BS politics I chose to shut myself away from local news broadcasts / media such as the Guernsey Press & Radio Guernsey because of the way in which they report the news and sensationalise it purely for ratings and reactions (BBC radio being the worst). Also I completely shut down my facebook account too because I found it a life absorbing waste of time. Now I tweet radio stuff instead and for entertainment listen to Radio 1 in the car. I’m down with the kids eh! 😉

So what am I doing with all my extra time after facebook? Well when it comes to a hobby, whilst photography is still really enjoyable it has taken a back seat for the time being and instead I’ve been playing radio, amateur / ham radio. If you explore this site you will see what I’ve been up to, or at least some of what I’ve been doing 🙂

In January 2016 I started going to the Guernsey Amateur Radio Society (GARS) every Monday (until April 2016) where we sat and ate biscuits and drank tea (along with some discussion about learning stuff)… see “about me” where there is more of a detailed timeline….

Anyway, the reason for this post is that I’d like to encourage anyone that may be interested in ham radio (young or old) to get in contact with me. Its a huge hobby and has an almost unlimited array of different aspects one of which may just spark your imagination / interest… I’d be happy to meet up and talk it through if you wished.

here are the basics relating to the exams to pass…

Foundation Licence: not too difficult – gives you a grounding and understanding of what radio is all about and by passing you have 10w to play with on many frequencies… see the link for more detailed information…

Intermediate Licence: the next step – a few more privileges and a larger understanding of the technicalities of radios and how they work… by passing this one you get most frequencies open to UK hams but with a limitation of 50w (and some operational limitations).

Full Licence: as its says – this is the full licence and comes with all the privileges  / frequencies open to you, there are no more exams after this one – but passing it is much harder and much more in depth technically than the other two. Passing this one gives you everything with a maximum output power of 400w plus all the privileges available to any fully licensed UK ham!

The study undertaken during the learning stages equips you with basic skills, electronics, soldering and understanding how radio waves work so when you do operate you know whats happening and understand what you are actually doing and how the weather and sun change things for radio.

Also did you know that your mobile phone is a radio, also the WiFi you use? Without even knowing it you are already transmitting radio waves (and receiving them) so you are using parts of the radio spectrum already! 🙂

It was satellites that gained my attention first after becoming a licensed ham (other than ‘normal’ radio) and you can work through any of the amateur radio satellites up there with a Foundation Licence – I made the antenna myself from roofing batten and coat hangars and you can use a radio that costs £25 to access a couple of those satellites – its that easy and that cheap to get started, however it does take some practice and some listening first too 😉

Here I am sporting a most excellent T-shirt at Pembroke on a busy sunny Sunday lunchtime, summer 2016, Oleg (MU/RL5D who took the picture) and I were trying to work an amateur satellite called FO-29 for the first time I think… the looks we had from passers-by were quite amusing 🙂 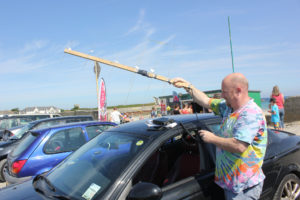 This next pic is looking out south east from Jerbourg one evening in April 2017 – in the picture is the £25 radio I mention above and the antenna I made – I was trying to contact my friend in Algeria over a satellite called SO-50, I didn’t do it that day, but the following morning (i think), I stopped off at the same place on my way to work and had a QSO (contact) with him…. in ALGERIA!! 5w, £25.00 radio and a coat hangar antenna that I made 🙂 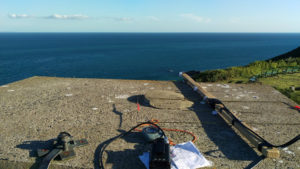 So if you or anyone you know might be interested then please feel free get in touch. Like I say above, there is so much to amateur radio its hard to put in writing in one place without it being a tad overwhelming.