Crikey – Its been a month since I last posted – busy at work (nice) and busy at home too, kids doing stuff, birthdays etc… Its going to be busy for a couple more yet too…

I’ve been wanting to expand my antennas so I’m not just working through a 20m dipole… I tried an end-fed but there is no balun / unun and its a crap performer – I’ve also played with 17m (on my 20m dipole) which has been OK (fantastic, no contests!!) – lots of QSB though and I’m not sure if that’s because of the antenna or the conditions as its every time I’ve been on 17m. So I want to set up an inverted V for 17m in the front garden… shhh, don’t tell my wife or the neighbours eh 😉

Picked up a complete Yaesu FT-707 set up for free in a shack clear out which was nice – needs some TLC as it has some issues but a fantastic project – thanks to Alan GU4RUK – ATU, 2nd VFO, Radio & PSU – she looks sweet and will be a great little set up once sorted. 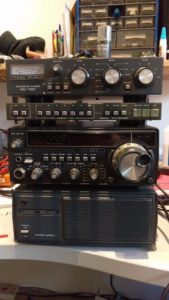 2nd harmonic has a CB radio now and Daddy has one in his car too – we talk on 11m but the reception and internal interference on the radio (Cybernet 1000 Beta, title pic) at home is bad (DV27 on a biscuit tin) – that needs sorting – however, I gave her the Foundation book to have a flick through today and she was really excited, even took it in to school… I’m hoping her enthusiasm lasts… wont push it but slowly slowly and all that… would be nice if she did get her MU6 at some point 🙂