Well – I wanted to post my build of M0CNL‘s easy digi as my next post, however I’d finished building it ages ago but I’m waiting on one plug to come from China, I’ll post it all up when I have the whole ‘story’ QSO included – its painful waiting as its been over a month – would really like to have a play – good things come to those that wait eh..

I fired up the IC-735 about 13:00 yesterday in what I thought would be another pointless exercise of calling CQ – its been utter rubbish every time I have tried recently – I worked a couple of Eastern EU countries and was chuffed to have done that… as I worked I was watching www.bandconditions.com in an attempt to understand how the propagation reports worked as they moved up and down – worked a few more and then, boom! quite a hefty little pile up for a noob like me and in poor conditions – a couple of USA stations too which was really nice – someone must have spotted me – so I looked at the www.dxsummit.fi website to see who thinking it might have been a friend and I would have said thanks and  its then I noticed that a VK had spotted me and said “weak in to Perth” !!

Oh wow!!! thought it was just going to be a spot and I would have been happy with that alone, heard in Australia on 50w and a home made dipole – amazing!!

I was about to close down as after a couple of hours and an unexpected mini pile up I needed a cuppa and a pee, but thought I would give a couple more calls and then to my massive surprise the spotter, VK6WX called me – shocked was an understatement. I was talking to someone 9200 miles away in SW Australia!! Another new moment for me 🙂 I’m a very happy bunny!! 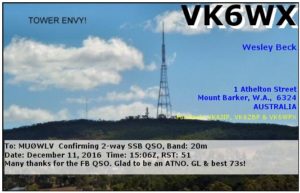 Its all probably common place for you long standing hams – however, cast your mind back to that first long haul DX you made – the rush is awesome and lasts for a good while – its bloody addictive just like the sats eh 😉