At the end of last year (2016) I had learnt about 7 or 8 letters using the Koch method using a brilliant android app from IZ2UUF along with some dips in and out of the great website http://lcwo.net – I was very pleased with myself.

The speed at which I’ve learnt the first few letters has been quite quick, but adding this latest letter N has slowed me down considerably. Although over just a couple of days its become easier and I’m finding that each letter is taking a couple of days to sink in enough to keep up decoding at 25 wpm (with some decode issues occasionally)

The reason I’m listening at a receive speed of 25 wpm is I have been told (& read) that it’s easier to slow down than it is to speed up – many places say that if you learn at a faster rate it’s better / easier in the long run. 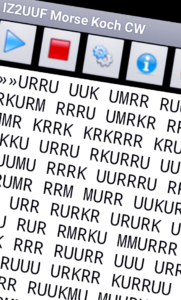 The thing with Koch is the randomness of the characters, there is a standard format when each character is added and I’m sure I’ll keep adding them over the next weeks… not sure how far I’ll get but if I drop the ball again then its no sweat, I’ll just pick it up another day…

I’ve found that the phone app is great for listening as you drive…. I get a good 10 mins each time I drive to and from work and if I find it too much I just turn it off… 🙂 I’m not pushing myself very hard as I don’t want it to be a chore… I want to enjoy learning and get the decoding sharp – I’ve found the best way to learn anything is to enjoy it, don’t force it!

I’m sure even if you don’t think you know any Morse code you will know the sound of CQ CQ or what SOS sounds like? – if you haven’t already then why not start the learning process… there are some fantastic resources out there (a couple of which are mentioned above) but there is also @lids_cw (the Less Involved Data Society) who are always happy to help or to arrange a QRS sked!

What ever you do don’t think you cant do it, plod along at your pace and one day it will just click – that’s what I’m hoping will happen for me anyway :-).