A week or two ago a local ham (Alan, GU4RUK) was having a clear-out of some old bits and bobs, mostly old gnarly stuff but not having an ATU when I saw there was one on the list I was there like a shot.

I managed to pick up this little beast, home-brew by Alan and it’s for end fed antennas – good for up to about 100w too apparently! Its very clever.. its a Pi / T and L in/out which is configured with the wires on the front depending on which socket they are plugged in to. 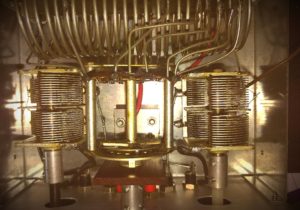 However, this type of antenna is completely new to me so I need to read up on it. The first thing I notice is that being end fed it will bring RF in to the shack and also should really have a ground too or a counter poise. So, I plan for it to become an end fed outside of the shack.. sort of not making it an end fed.. coax to outside, with the screen of the coax connected to my shack earth stake and the wire strung up in the front garden – the wife is going to love it as she already says it looks like Steptoe’s yard…

I typed the above before I had managed to lay it out, however with the wife away this weekend today I managed to string it up in front of the house, a sort of inverted V – I am guessing its about 14m long in total – At the moment I don’t have a proper SWR meter, well I do but its old and for some strange reason it wont set properly i’m guessing its for a specific frequency but I cant find much info on it – then I remembered I had a SWR meter for CB (yes I will use CB and still will if anyone was actually on it) – so 10m was the band to test the ATU on eh!!  It seems to work, first 10m QSO, SSB HF with my good friend Colin –  (MU0FAL) – he is a mine of information and has been there for me since I started ‘gaining the knowledge’ – a fantastic help and he #knowsstuff 😉 (cheers Col!) – anyway, the wire / ATU works, at least locally.

I have tried other frequencies… 40m was interesting, hearing so many UK voices was different – haven’t made a QSO father afield yet though on 10m – need to tidy the shack up, sort cables, tuck and hide them away, shorten etc… its all a bit messy whilst i find what works etc…

So, another band added – happy days